I’ve got a kind of groovy wall calendar this year – I picked it up on sale (of course) at MoMA in NYC in January. It’s from a company called Paper Hammer and is a letter-press looking jumble of days. Sometimes I glance at it in amazement and wonder. 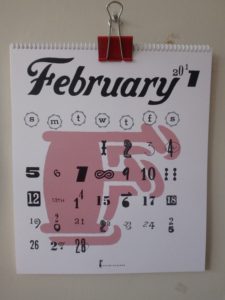 This February seemed like a tumble of days, with a lot of quiet ones in there mixed together with some pretty amazing highlights. Sometimes it’s just a little too easy to let the slow gray days overshadow the bright and busy ones. I suppose we can all use the reminder that there is always something unique about every day, even if it seems hard to recognize.

So what *was* February like? It was full of meetings and quite a few birthday celebrations – not mine – others – but I seem to know a lot of Aquarians.

Have you ever walked into a social situation and met a couple of fabulous people from your past who you could NEVER predict would be there? I popped into the Canterbury Music Tri-Engineer Birthday fest which is sort of like wandering in a tableau of who’s who of Toronto in music – okay, that’s normal. But when I spotted my old friends Dave and Sandra…it was as if it were *my* birthday. We tried to figure out how long it had been – too long! There are a whole lot of unlikely connections and precious memories stirred up which would take pages to explain but let’s just say it was a delight and a surprise. And I almost didn’t go to that party. I was feeling sore and grumpy and it would have been soooooo much easier to stay in and binge watch Stephen Colbert on the internet, but in the end I was glad I went out.  So, on those gray days when you feel nothing is going right, consider going out instead of staying in. Even us achy introverts need a little social time and it could be magic. Many and happy to Jeremy, Julian, David, and all the Canterbury crew – you create a great space for us to play in.

Turkwaz getting a Juno nomination was another lift.  Plus we participated in a Sofar Sounds event on February 11th. These are basically secret concerts, the location is disclosed the night before and the attendees don’t know who they are going to hear until they get there. It’s a pretty interesting model. Our concert was hosted in a loft-y space behind the Dark Horse on Queen St E. It was a wintery day, great snowflakes fell mushily and slushily throughout the afternoon as we set up the sound and met the crew and our fellow musicians. We shared the evening with Emilie Mover and Chris Bartos, and Winnipeg’s Begonia. The cool thing about these concerts is that people come to really listen and to be surprised and introduced to something new -it adds a shade of adventure to the event. Sofar will be adding a song from the show to their video gallery in the weeks ahead.

Going to Folk Alliance International in Kansas City definitely helped me get some wind back into my sails. I’ve been to a number of conferences before, mostly to WOMEX in Europe. I was  really curious about this particular edition – Billy Bragg was a keynote speaker for one thing – but I was heartened to hear that the conference directors were taking the word ‘international’ to heart and there were artists and distinguished folks from around the world showcasing and participating in the panels. Folk Alliance has long had a focus on traditional American music and singer/songwriters  – nothing wrong with that! We could debate long and hard about what constitutes folk music but the fact is that the elements that make up the music of America and the Americas are pretty diverse and it helps every once in a while to recognize and celebrate that. There was so much great music but a few stand-out discoveries were Curly Strings from Estonia, Söndörgő from Hungary and Ramy Essam from Sweden (and Egypt). I hesitate to call Gweneth Herbert a singer/songwriter but I guess that’s what she is. Intelligent and thoughtful songs and the gal can really sing – wonderful! Authentic Light Orchestra (don’t let the name fool you) had a lovely, jazzy sound and featured another great vocalist Veronika Stalder, and Toronto friends Kobo Town were fantastically calypsian. Bruce Molsky as always made trad American deep and lively, I’d heard of Jonathan Byrd but had never seen him, now I get it – fantastic, Newberry & Vertch are a fantastic pairing of two masters… Great to see James Hill and Anne Janelle again (and meet their baby Alder) and finally hear Ben Caplan live, too. Nora Guthrie did a wonderful talk on Woody’s songs which got me thinking about trying to write songs again. Really there was so much I can’t begin list it all.  The hotel room showcases are legendary and it takes a certain amount of mettle for us introverts to mosey around and take them in. Overall, fully worth it. And the icing on the cake was a set by one of my favourite troubadours out there, Steve Poltz, who as usual had us marveling about “just how does he do it?”, in this case ‘us’ being me and my accomplished singer-songwriter friend Eve Goldberg. It gave us so much to think about and be in awe of as we shuttled to the airport to fly back to Toronto.

I was too busy to take pictures most of the time but here’s a special one from the first night:

Another Aquarian birthday celebration with Nora Guthrie, Frederica Calvino Prina, Beppe Gambetta, Derek Andrews, Linda Turu, me and Michael Kleff. In case you can’t tell there are two creatures on the table, the bean bag rhino and his new friend Sigi. 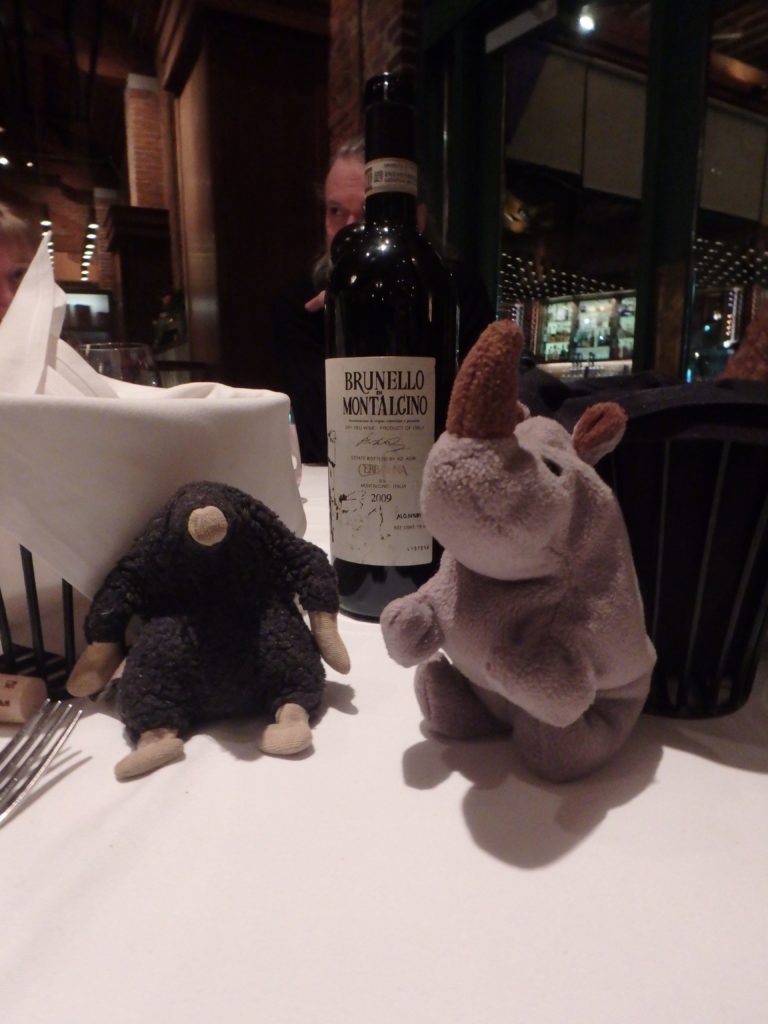 So that was three quarters of February – and there are still more days I didn’t enumerate. I was thinking that really I’d done nothing much this month but then when I stop and think about it….
If you’re feeling the mid-winter blues, if your days seem too gray and similar, take a minute to remind yourself about what’s different…And if you really can’t find anything – do it yourself! Turn a few numbers on their side or use green ink to make a list or take a ridiculous stuffed toy out to dinner! 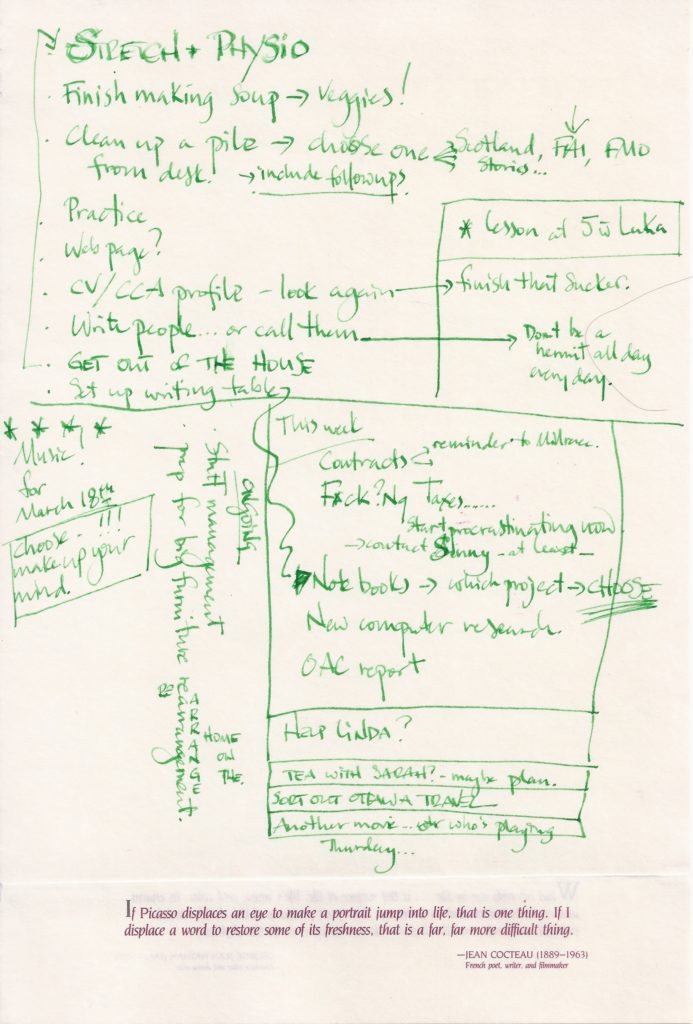